When we first planned our first volunteer event of the year, we didn’t know that President Trump would plan to cut funding for Meals on Wheels to meet his budget plans. To us, Meals on Wheels was one of the first things that came to mind with the idea of volunteering. The NYC program Citymeals on Wheels is a public/private partnership with the New York City Department for the Aging (DFTA), which likely benefits from state and federal grant funding as well, so it’s quite heart breaking to hear the shift in priorities. After spending Saturday morning talking to the elderly, dropping off meals, and experiencing the graciousness of those who need these deliveries, I’ve developed a better appreciation for these services, and I would highly suggest everyone to step out of their comfort zone and do the same, to fully understand how this slight shift in budget impacts different people. How often do we ignore the impact of budget cuts, and rule changes when it doesn’t directly impact us?

On an early Saturday morning, we trekked out to East Harlem’s Union Settlement Association within the Jefferson Houses, some coming in from an hour and a half commute with no coffee to boot. Yet, once we were greeted by Autrice, our highly energetic team leader, I quickly found her energy contagious as I took up the position of bread/ orange filler in the breakfast assembly line. I met Jalen and Dalaise, a mother and son team that was also at their first meals on wheels event, and we swiftly packed a pint of milk, orange juice, a slice of bread/butter, and oranges into over 200 cold packs. The others were scooping hot meals (roasted chicken and mashed potatoes), vacuum sealing the packages, and once we packed them into our bags, we were off onto our designated routes. 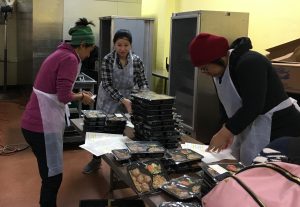 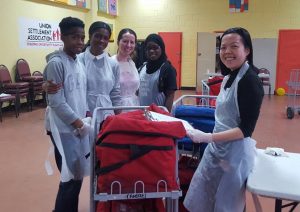 We had two and a half hours, and over 40 visits to make. It had rained the day before, and we had to plow our cart through a lobby filled with water and garbage, and experienced some less than savory smells in the elevator banks. Sometimes, we were the only visitors that checked in with these folks during the day, so we made sure to ask how they were feeling. We were met mostly with smiles, but sometimes, they admitted they weren’t feeling great, and then I worried for them as I would for my own grandparents.

We passed by a nearby church with a meager offering of food in metal trays in a makeshift buffet out on the sidewalk, and noticed a line of people around the block, waiting in the cold to collect their meals. That’s when I realized that 200 meals being delivered that morning across all the routes was barely enough to meet the needs of the neighborhood. There are too many New Yorkers that struggle with hunger, and these are their every day concerns.

After our deliveries, I yelped for a highly rated coffee shop, and found Dear Mama coffee, and we had our fill of cappuccinos, egg sandwiches and even stroop waffels. It was an unexpected hipster find just four blocks from the church, and the housing projects. I instagrammed my cappuccino.

I’ll be the first to admit the irony of it all. It’s easy to detach yourself from the grit of the city, and only focus on what’s instagrammable, but it’s for the best of all of us as New Yorkers, to understand the differences around us and find the commonalities among them. Especially since politics and policies can divide us, understanding others is a critical step to combat the fear and hate in this world today. Food is a basic need, and in a city that has everything, I find it hard to believe that we couldn’t work together to share more and waste less.